Not a single sparrow has been seen in the Meusebach Village in human memory, so the nickname of the village became “Dorf ohne Spatzen” or “Village without Sparrows”. An old legend explains this:

Once in Meusebach a mayor named Leonard had a son who despised his lovely small village and left to see the wide world. No one seemed to miss the boy except his family, perhaps in long winter evenings by the fire. 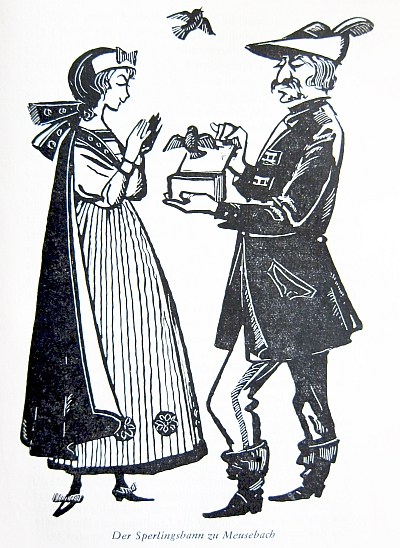 After many long years the sun-tanned and wild-looking son, now a man, returned to the village. He had become extremely wealthy! Just about the time of his arrival, his sister married a rich fellow from the village. As a wedding gift, the brother gave the couple a very tiny box, from which flew out two small twittering sparrows. All were overjoyed at the gift.

But each year the sparrows increased in frightening numbers, over and over, until the sparrows ate all the harvest in the fields and devastated the trees. All attempts by the villagers to expel the ravenous birds failed, and without crops the people were without hope.

Then a journeyman in a green willow national costume arrived. When the hunter saw the plight of the villagers, he predicted that he could rid the village of the famine-bringing birds.

He asked that he be allowed to plant trees everywhere in the meadows and hills– and use some of the wood. The frightened Meusebachers agreed and were delighted at this idea—if only the sparrows could be totally expelled from the area.

Then the man brought two carriages of spruce seed and one carriage of beechnuts which he planted in the wide fields and meadows during many long days. He cast a spell over the land and seeds, and as he planted the very last field all the remaining sparrows flew away. The sparrows will never return as long as the magic spell lasts—which may be forever.

(The original legend was in “Wooden Country Legends” by Kurt Gress, 1898.) August 2012
The picture is from Hans Wiegant “Holzlandsagen”